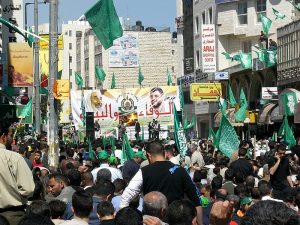 Two of those sentenced, a 58-year-old Gazan and a 57-year-old from Khan Younis, have not currently been detained by authorities in the Gaza Strip, the military judiciary admitted.

The judiciary stated that the sentences were issued “within the framework of carrying out its duty to protect Palestinian society, and to confront the scourge of communication with the Israeli occupation”.

According to the Palestinian Safa news agency, any collaborator who surrenders willingly to the Gaza authorities benefits from an easing of trial procedures.

It is not yet clear what the six people are alleged to have done that constituted ‘collaboration’ with Israel, which unilaterally withdrew from the Gaza Strip in 2005.

Hamas rejects the peace process with Israel and seeks to destroy the Jewish state altogether.

Hamas’s founding charter is explicitly antisemitic and commits it to the foundation of an Islamist state across the entire territory Israel and the Palestinian Territories.