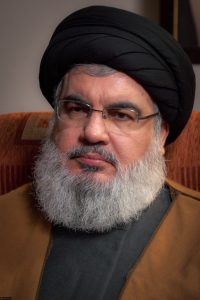 The Hezbollah-run Al-Manar TV announced on Sunday that leaders of Hezbollah and the Hamas met to discuss the consequences of diplomatic normalisation between the Jewish state and the United Arab Emirates. The meeting comes on the back of US President Donald Trump announcing Israel and the UAE agreeing to normalise relations, including the establishment of direct flights between the two and the establishment of embassies. It is the first agreement between Israel and an Arab state since the normalisation of relations with Egypt and Jordan over 25 years ago. The meeting, which included Hezbollah head Hassan Nasrallah and Hamas political bureau head Ismail Haniyeh, focused on the “dangers to the Palestinian cause” that further Arab normalisation of Israel would create following reports Israel are in discussion with other Arab nations. The Hezbollah and Hamas meeting emphasised the need instead for “stability” of the “axis of resistance” in the Arab world against Israel. The news emerged as the Palestinian Authority has – in contrast – watered down their resistance and language towards the Israel-UAE agreement in a resolution to the Arab League. On Tuesday, Palestinian president Mahmoud Abbas issued instructions against offensive statements or actions towards Arab leaders, including in the UAE. Abbas had previously described the agreement as a “betrayal” and a “stab in the back of the Palestinian cause”. The Palestinian authored resolution being debated in Arab countries states that the UAE agreement “doesn’t diminish Arab consensus over the Palestinian cause, the Palestinian cause is the cause of the entire Arab nation”.
Read full article