It was the first meeting between the two General Secretaries of the sister parties in over four years, and the first formal meeting between senior officials in both parties since the Israeli Labor Party’s decision to suspend relations with the Leader of the UK Labour Party in March 2018. It marks an important moment on the path towards a full restoration of relations. 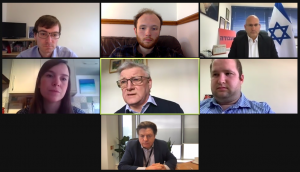 “I was delighted to meet with Eran Harmoni, the General Secretary of the Israeli Labor Party, in what we hope marks a new era of relations between our two parties.

“I expressed my personal sorrow for the grief and pain that the failure of the Labour Party to tackle antisemitism has brought to Jewish communities here in the UK and within Israel.

“It will take time to rebuild trust but I am delighted that we have taken our first steps to rebuild this vital sister party relationship. I look forward to working with Eran and the Labor Party on restoring and reenergising our long, historic cooperation.”

Both parties share common values and can join forces in the battle against racism, antisemitism and prejudices and would be the right and just thing to do after the problematic era of Labour under the previous leadership.

It was heartwarming to hear the sincere apologies spoken by General Secretary of the Labour Party, David Evans, and to witness the unprecedented practical steps the British Labour Party has taken since Keir Starmer’s election. I am looking forward to our shared promising future.”

“I’m delighted to have joined the first call in a number of years between the General Secretaries of the UK and Israeli Labour parties.

It marks an important moment in the rebuilding of the crucial sister party relationship and in demonstrating the progress being made to restore trust in UK Labour among our friends in Israel.

LFI will continue to do everything we can to strengthen the fraternal bonds between progressives in both countries.”