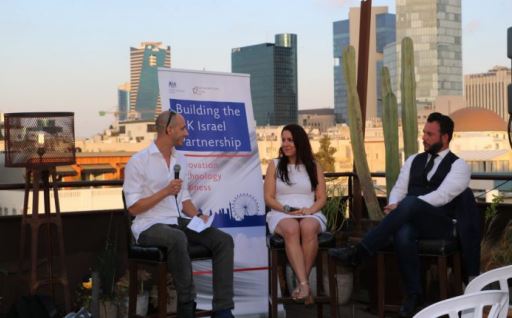 The British ties with Israel are becoming wider and deeper, according to a new report from BICOM published this week.

It details the burgeoning bilateral trade and economic, security and foreign policy, and cultural and scientific links between the two countries. It also notes that, while British public attitudes towards the Jewish state have remained largely stable in recent years, the BDS movement – despite the noise and aggression accompanying it – is proving largely ineffectual.

“In just a few years Britain-Israel relations have been transformed,” said BICOM chief executive James Sorene. “Bilateral trade is booming with an increase of 72 percent in six years. But beneath the stats there is evidence of extensive collaboration in cybersecurity, fintech and healthcare. Britain and Israel are sharing expertise and experience at every level to counter similar national security threats and our armed forces are carrying out joint exercises to test capability and learn from each other. When the UK leaves the EU, Israel will be a vital partner as Britain looks to intensify innovation and export more products to distant markets.”

The UK represents Israel’s third largest export market, behind the US and China. In 2018, goods – notably pharmaceutical products, precious stones, plastic products, machinery and mechanical appliances, electrical machinery and equipment, and fruit and vegetables – totalling $4.3bn were sent to the UK.

At the same time, UK exports to Israel were worth $6.15bn in 2018, with important trade deals including a $1bn agreement for Rolls-Royce to supply Trent jet engines to El-Al for its new Dreamliner fleet. According to the report, UK foreign direct investment in Israel reached £260m in 2016.

Israel also became the first country to sign a continuity post-Brexit trade deal with the UK in early 2019. It calls for the establishment of stronger ties between the two countries including preferential tariffs and quotas, provisions on the rules of origin, limited areas of services, competition and intellectual property rights, government procurement and conformity assessment of industrial products.

Israel’s famed tech industry – spurred by the fact that the country spends four percent of GDP on R&D, the highest expenditure as a percentage of GDP in the world – is key to Britain’s increasing trade and economic relationship. This was underlined in 2011 when the UK became the first country to establish a special mission to Israel to bolster tech cooperation in the form of the UK Israel Tech Hub. It generated 175 partnerships worth £85m between 2012-18, which is estimated to have boosted the UK economy by £800m.

Israeli tech is also playing a major role in the National Health Service, with the UK importing £2.8bn  worth of Israeli pharmaceuticals in 2018. Moreover, that tech is helping the NHS to save money: based on the NHS’s total drugs bill and the amount of generics Israeli firm Teva provides the NHS, the report says, Teva estimates it contributes more than £2.9bn of savings per year to the British public. Israeli tech companies are also now leading the effort to digitalise the NHS. Israel is considered a world-leader in the field, with 100 percent electronic medical records.

As the BICOM report notes: “The UK and Israel share many common foreign policy priorities due to Britain’s long-standing presence in, and commitment to, the Middle East – including the fight against radical Islamist terrorism, the British military deployment to Syria, support for the Hashemite Kingdom in Jordan, and the isolation of Hezbollah in Lebanon.”

Britain last year, for instance, joined with France and Germany in condemning Iranian testing of medium-range ballistic missiles (which have the capacity to carry nuclear warheads), including, reportedly, one capable of hitting Europe. Britain also last year proscribed Hezbollah in its entirety.

The report notes, however, that Israel would like to see the UK, along with other European countries, exert political and economic pressure on the Lebanese government to prevent Hezbollah continuing to build up is military arsenal and personnel in the south of the country. Britain provides support to the Lebanese armed forces – designed to buttress its strength against Hezbollah – although Israel believes it closely cooperates with the terror group.

Defence and security cooperation between Israel and Britain is also close, with the Jewish state the third-largest arms supplier to the UK (UK arms sales to Israel, by contrast, reportedly account for no more than one percent of Israel’s military imports). Israel’s Mossad spy agency is also believed to be the second-largest intelligence sharing partner with Britain after the CIA, according to media reports cited by the report. Moreover, Israel has considerable expertise in cyber-security and this is being deployed to protect London as one of the globe’s premier financial centres.

Of course, Britain and Israel have adopted different approaches with regard to the Iran nuclear deal. However, that agreement now appears close to collapse with Britain, France, and Germany last week triggering the dispute resolution mechanism following the Islamic Republic’s repeated violations of its terms.

The UK has also voiced strong criticism at times of Israeli settlement-building in the West Bank, as well as opposing moves by the Trump administration such as unilaterally declaring Jerusalem to be the capital of Israel.

Despite these disagreements, Israel’s security establishment is supportive of British financial, security and technical assistance to the Palestinian Authority – which it regards as a stabilising force – as well as humanitarian aid to the Palestinians.  As the report argues: “For the past several years, a pillar of Israeli military strategy in both the West Bank and Gaza Strip has been to improve economic and humanitarian conditions precisely as a bulwark against terrorism and violence.”

Public attitudes and the failure of BDS

BICOM polling has shown public attitudes towards Israel have been stable since 2011. There is also public recognition that Israel is an important trading partner for the UK and an important ally in the fight against terrorism. Moreover, only 14 percent of British voters in a BICOM poll last month expressed support for the BDS movement, which opposes a two-state solution and rejects Israel’s right to exist.

The Queen’s speech saw the government propose further measures against BDS. However, the report notes that, prior to the government implementing new guidelines in 2016 there were no examples of any local authority ever having implemented a procurement boycott of Israel (a move which would already have been illegal under existing legislation). In all, nine out of 407 UK local authorities (four of them in Northern Ireland) have adopted policies supporting a boycott of Israel.

Despite some religious and civil society groups, including trade unions, adopting pro-BDS policies, efforts at a cultural boycott of Israel have been largely unsuccessful, especially when compared with the growth of scientific and cultural links. The former is exemplified by the Britain Israel Research and Academic Exchange, which promotes scientific research collaboration between the two countries. Since its establishment, BIRAX has provided more than £10m for joint biotech research projects between British and Israeli scientists. In terms of cultural ties, the report concludes, “British culture has for the past several decades been a mainstay in Israel, while Israeli cultural events in the UK have flourished in recent years despite sporadic campaigns for them to be boycotted.”