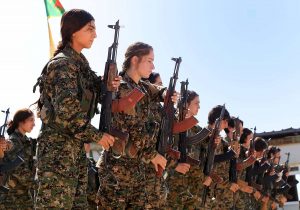 President Trump’s decision last week to abandon the Kurds and give the green light to Turkey’s invasion of north-eastern Syria has sent shockwaves through the Middle East, including in Israel.

Even as the US now apparently scrambles to rein Turkey in, the impact of the president’s actions may be far-reaching.

Israel has long been supportive of the Kurds and its reaction to Trump’s decision showed a rare moment of tension between Washington and Jerusalem.

“Israel strongly condemns the Turkish invasion of the Kurdish areas in Syria and warns against the ethnic cleansing of the Kurds by Turkey and its proxies,” Benjamin Netanyahu said on Thursday. “Israel is prepared to extend humanitarian assistance to the gallant Kurdish people.”

Israel – which has a fractious relationship with Turkey – has previously indicated its support for Kurdish statehood. Five years ago, for instance, Netanyahu praised the Kurds’ “political commitment and political moderation,” and said they were “worthy of their own political independence.”

The prime minister’s position reflects a broad political consensus in Israel, which also saw demonstrations at the weekend against Turkey’s actions.

But it isn’t just sympathy for the Kurds which is driving Israeli concerns about the US’ abandonment of their former allies.

Israel rightly fears that America’s withdrawal from Syria will enable Islamic State and other jihadist groups – which are virulently antisemitic – to exploit the vacuum which Trump has created.

More important still, Israel fears that the US president has further emboldened Iran, put at risk the growing rapprochement between it and moderate Arab states, and demonstrated his unreliability as an ally.

Turkey’s invasion has also forced the Kurds to seek help from the Assad regime and its allies, Russia and Iran. Vladimir Putin, who has long wanted to see the back of US forces in Syria in order that he can strengthen his own grip over the country, has never fulfilled his pledge to Netanyahu to keep Iran and its proxies away from the border with Israel in the Golan Heights.

It is Iran, though, that is likely to be the big winner from Trump’s decision. It will help the Islamic republic complete its long-sought “arc of influence” via a land bridge linking Tehran to the Mediterranean Sea and the border with Israel, taking control of a swathe of territory through northern Iraq and Syria.

Underpinning Iran’s strategy in Syria is a determination to destroy Israel. As Karim Sadjadpour, senior fellow at the Carnegie Endowment and a professor at Georgetown University, has argued: “Distilled to its essence, Tehran’s steadfast support for Assad is not driven by the geopolitical or financial interests of the Iranian nation, nor the religious convictions of the Islamic Republic, but by a visceral and seemingly inextinguishable hatred for the state of Israel.”

The US troop withdrawal is thus critical, Thomas Friedman, the New York Times’ foreign policy specialist, noted. “Those troops were also interrupting Iran’s efforts to build a land bridge from Tehran to Beirut to tighten a noose around Israel – and their removal could help bring the Iran-Israel shadow war out into the open. This is the really big story in the Middle East today.”

That noose comes, in part, in the form of the missiles with which Iran has furnished its proxy army, Hezbollah, as well as its militias in Iraq. Over recent years, Iran has also worked to ensure that this weaponry is formed of the kind of precision missiles which can target key Israeli infrastructure, military sites and population centres.

Iran does nothing to hide its ambitions. Last week, Qassem Soleimani, the commander of the Quds Force of the Iranian Revolutionary Guards Corps and the mastermind of the regime’s regional expansionism, declared that it had established “territorial continuity” between Iran, Iraq, Syria and Lebanon. Iran, he boasted, had expanded “the [anti-Israel] resistance from a geographical territory of 2,000 square kilometres in southern Lebanon to a territory of half a million square kilometres”.

Trump’s betrayal of the Kurds – in a week he has gone from praising them as “a special people and wonderful fighters” to suggesting that they were deliberately freeing the IS terrorists they had imprisoned and guarded on behalf of the west – is also likely to embolden Iran because it compounds a picture of the US president abandoning allies. Last month, for instance, Trump stood idly by after an attack on major Saudi Arabian oil fields and processing facilities which has been widely blamed on Iran. Iran has also paid no price for its attacks on shipping in the Gulf in the summer and, indeed, for its shooting down of an American drone in June.

It is against this backdrop that Israel fears Iran might attack it. “Trump’s isolationism,” Or Heller, the military analyst for Israel’s Channel 13 has argued, “will encourage the Iranians to act against Israel with cruise missiles and drones”.

“We are already in a highly volatile period, with Iran attacking US allies,” Ofer Zalzberg, an Israeli analyst for the International Crisis Group, also suggested. “The Israelis are bracing against an Iranian attack. The defence establishment believes Iran will strike within two months. The Israeli reaction would be very different from the Saudi nonreaction, and Iran knows that. But it’s very dangerous to encourage Iran to feel safer and to give Iran more courage in its decisions.”

It is not only the fact that the attack on Saudi Arabia went unanswered that concerns Israel, but also the sophistication of it, with the drones and cruise missiles undetected by Saudi and US radar. (Israel uses the Patriot air defence system deployed by the Saudis, but also has other capabilities the kingdom does not).

A successful missile attack on Israel would meet a fierce response, with the Jewish state likely to attack the Hezbollah stronghold of southern Lebanon. It might also hit Iran directly depending on the nature of the assault Israel has sustained.

At the same time, current US policy in the Middle East threatens to push the Gulf states towards Iran and bring to a close the thawing of relations between them and Israel. As Friedman suggested, Trump’s inaction “fractured the tacit US-Sunni Arab-Israel anti-Iran coalition and left Israel feeling more alone than ever to deal with Iran – and its proxies on Lebanon, Syria and Iraq”.

Michael Oren, a former minister under Netanyahu and Israeli ambassador to the US, has argued that a tough American stance towards Iranian nuclear and expansionist ambitions was key to the unprecedented, often behind-the-scenes dealings between Israel and the Gulf states.

“Take that away, and how amenable are the Gulf states going to be to do anything with Israel,” he asked.

The already-slim chance of Trump’s peace plan gaining any form of traction is also now at risk, Oren continued. “Trump’s ability to even advance a peace process with the Palestinians was predicated on his ability to stand up to the Iranians. Why would the Saudis be on board with a peace process? Why would the Emiratis? Nobody’s connecting the dots. If you’re in favour of peace between Israel and the Palestinians, you’ve got to be in favour of a strong US policy toward Iran.”

Beyond this – and, for Israel, most worrying of all – is the prospect that Trump’s capricious foreign policy may mean that the US would not necessarily come to the Jewish state’s aid if required.

As Shimon Shiffer wrote in Yedioth Ahronoth, Israel’s biggest-selling newspaper, Trump’s behaviour towards the Kurds “must set all our red lights flashing. The conclusion we draw needs to be unequivocal: Trump has become unreliable for Israel. He can no longer be trusted”.

Netanyahu, whose warm relationship with Trump the president coldly dismissed when the prime minister once again failed to win a majority in last month’s general election, appeared to concede Shiffer’s point last week. Without directly criticising the US’ actions in Syria, he declared at a memorial service for those who died in the 1973 Yom Kippur War: “We always remember and implement the basic rule that guides us: Israel will protect itself, on its own, against any threat.”

Netanyahu is, of course, not responsible for Iran’s 40-year old desire to wipe Israel from the map. Nor is he to blame for the actions of Russia and Turkey in Syria.

However, even while Barack Obama was still president Netanyahu played fast and loose with Israel’s traditional policy of keeping out of US politics and making sure it had good relations with both the Republican and Democratic parties. Instead, he gave every sign of believing that – even as he insulted, abandoned and humiliated the US’ allies around the world – Trump would always stand by Israel. That judgment now appears to be a monumental miscalculation for a prime minister who, with his political and legal woes mounting, may have only weeks left in office. “Mr Security”, as Netanyahu was dubbed by his supporters, will leave behind a country less secure than when he became prime minister a decade ago.