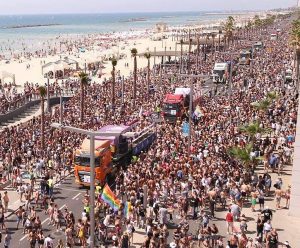 Tel Aviv will not be staging its annual Pride parade this weekend due to the coronavirus pandemic.

The event, which was attended by 250,000 people last year, is the Middle East’s largest but organisers say they are hopeful that it may be able to take place later in the summer. Parades in Jerusalem, Haifa and Beersheba have also been postponed, although virtual events will be held to mark Pride month.

Tel Aviv Pride, which was first held in 1998, both celebrates the huge achievements of Israel’s LGBT community and campaigns for unresolved issues to be addressed. It also highlights that, while the Jewish state remains a beacon of gay rights, the wider picture across the Middle East remains a grim one.

While Israel inherited Mandate-era laws banning same-sex relationships, there is no record that these were ever enforced after 1948.

Israel’s record on gay rights compares favourably to Britain’s. In 1963, four years before homosexuality was decriminalised in the UK, Israel’s attorney general formally announced that no action would be taken against consenting adults having gay sex.

Discrimination in the workplace was banned in 1992 and the bar on gays serving in the military lifted in 1993. Similar measures weren’t introduced in Britain until 2003 and 2000 respectively. In Israel, same-sex partner benefits were recognised in the private sector in 1994 and the public sector in 1997. Israel equalised the age of consent in 2000 – the same year as the UK. The ban on gay men giving blood – still only partially removed in the UK – was lifted in 2016.

This year has seen further advances when the Supreme Court struck down a law which prevented single men and gay couples from using surrogacy to have children. The court order required the Knesset to pass new legislation within a year. In a unanimous decision, the panel, which was led by chief justice Esther Hayut, ruled that current surrogacy laws “disproportionately violate the right to equality and the right to parenthood of these groups and are illegal”. Israel’s largest gay rights group, Aguda, said the decision was a “historic victory for the gay community”.

Previous attempts to reform the surrogacy laws in 2018 faltered in the face of opposition from ultra-Orthodox parties in Benjamin Netanyahu’s government, sparking nationwide protests. The prime minister faced ridicule when he publicly expressed support for a bill which would have extended the surrogacy laws to LGBT couples before eventually voting against the legislation on the basis that there wasn’t a majority in the Knesset to pass it. Benny Gantz, now Israel’s deputy prime minister, welcomed the High Court’s ruling in February and pledged to back amendments to the law in line with it.

Nonetheless, important issues remain to be addressed. Perhaps the most important is that of same-sex marriage. The issue is complicated by the absence of civil marriage in Israel. Instead, whether Jewish, Christian or Muslim, people are required to marry through their religious institutions, none of which will marry same-sex couples. Israel recognises same-sex marriages performed abroad and in 2014 announced that the Law of Return – by which any Jew in the world can emigrate to Israel – would apply equally to same-sex couples. Tel Aviv and Jerusalem also accept gay couples as legal familial units, while the country’s recognition of unregistered cohabitation (essentially common law marriage) provides important de facto rights for gay couples in terms of inheritance and pension rights.

Surveys show that nearly 80 percent of Israelis support same-sex marriage or civil partnerships and previous efforts in the Knesset to introduce gay marriage have only narrowly failed. While the principal barriers to reform are the ultra-Orthodox and religious parties, polls indicate that they may be out-of-step with their voters: 58 percent of religious Jews and 65 percent of voters who support the national-religious Jewish Home party also back gay marriage or civil partnerships (those figure rose to 84 percent of Likud voters and 100 percent of Labor and Meretz voters).

The leading Jewish Home politician and former education minister Rafi Peretz caused fury earlier this year when he appeared to suggest gay marriage was unnatural. Peretz’s comments followed a storm in 2019 when he initially endorsed so-called “conversion therapy” before later backtracking and saying he “utterly” opposed the “wrong and grave practice”. In response to Peretz’s comments on gay marriage, a number of mayors in Tel Aviv and neighbouring cities directed schools to dedicate an hour to talking with students on themes of tolerance and acceptance. More than 3,000 students and their teachers also took to the streets of Tel Aviv, staging a protest rally against Peretz in the city’s Rabin Square.

A grim picture beyond Israel

The rights exercised by gay people in Israel are not mirrored elsewhere in the region where discrimination is widespread, crackdowns frequent and legal penalties often harsh.

In Yemen, Iran, Saudi Arabia, and Qatar, the death penalty is in place for same-sex sexual activity. Iran’s record of executing those accused of homosexuality was defended last year by the country’s foreign minister, Mohammed Javad Zarif. “Our society has moral principles. And we live according to these principles,” he told a press conference.

According to research conducted by Human Rights Watch in 2018, almost all Arabic-speaking countries in the Middle East have laws in place which, explicitly or not, can be used to criminalise same-sex sexual relations. In many states, these include laws which simply ban all sex outside of marriage.

Some countries, such as Oman, Dubai, Syria, Yemen and Gaza, explicitly bar gay sex between men, while others, such as Lebanon and Abu Dhabi more vaguely ban “unnatural sex”; provisions which can be used to criminalise same-sex relations. Egypt and Bahrain both use “morality” laws to harass and persecute the LGBT community.

Iraq does not explicitly ban same-sex sexual relations. However, the position of LGBT Iraqis is a perilous one. The Mahdi Army, the former militia of the influential Shia cleric Muqtada al-Sadr, waged a brutal and vicious campaign of extra-judicial executions, kidnappings and torture targeting gay Iraqis in parts of Baghdad ten years ago. Much later, al-Sadr condemned the violence perpetrated by his supporters, but he continues to incite prejudice against LGBT Iraqis. Last month, along with Iraqi political leaders and the country’s Foreign Ministry, he condemned the decision of some western embassies, including that of Britain, to raise the rainbow flag in honour of the International Day Against Homophobia.

Jordan decriminalised gay sex in 1951, although it too has vague “morality” provisions in place which, HRW reports, could be used to target same-sex conduct, although its government doesn’t systematically use them in order to do so.

The legal situation in Jordan impacts directly on the Palestinian Authority. In the West Bank (though not Gaza), the Jordanian Penal Code of 1951 is in force, and thus sexual acts between persons of the same sex, are not criminalised.

Last year, however, the PA banned al-Qaws, a Palestinian LGBT rights group, from organising in the West Bank and threatened to arrest activists from the group saying its activities are contrary to the “values of Palestinian society.” A police spokesperson also urged Palestinians to report on any al-Qaws activity and promised informers confidentiality. More than 60 Labour MPs and peers wrote to the PA’s ambassador in London to raise the issue. Israeli gay rights groups attempt to assist LGBT Palestinians in the West Bank, working with the UN on a tortuous process to attempt to resettle some abroad.

In Gaza, Hamas is known to arrest and torture gay men, while discrimination against women makes the position of lesbians especially difficult. Hamas has also been accused of monitoring social media and attempting to entrap LGBT Gazans. In 2016, the terror groups infamously tortured and murdered one of its commanders who it accused of theft and gay sex.

The danger gay men and women face across much of the Middle East isn’t just the result of the autocratic and authoritarian regimes under which many live. It is also a reflection of widespread societal prejudice. An Arab Barometer survey commissioned by the BBC’s Arabic survey last year found that acceptance of being gay is low across the Middle East. Even in Lebanon, which is considered more liberal than many of its neighbours, only six percent of respondents said they believed being gay was acceptable. Indeed, in Lebanon, Jordan, and the West Bank, more people found “honour killings” acceptable than homosexuality.

Public opinion is, however, not immutable: in 1987, two-thirds of British adults believed that homosexuality was always wrong and only 12 percent not wrong at all.