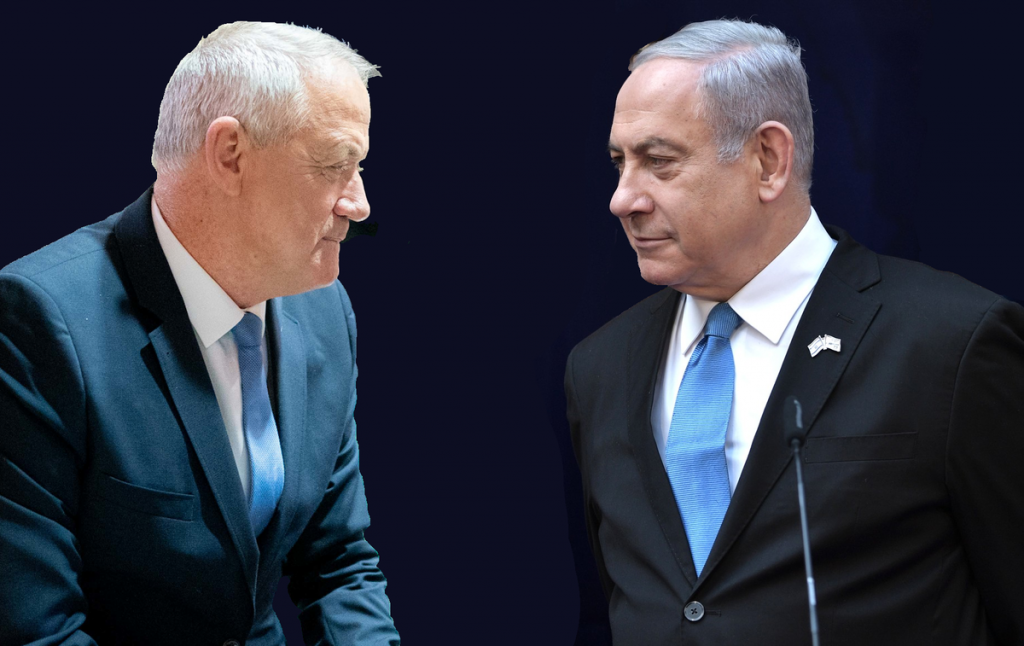 The roller-coaster path to the formation of a new Israeli government took new twists and turns over the last week, with Benjamin Netanyahu and Benny Gantz today locked in last-ditch negotiations ahead of a midnight deadline.

Gantz’s 28-day mandate to form a government – issued to him by President Reuven Rivlin last month after the country’s third inconclusive general election in less than a year – formally expired on Monday night.

The former IDF chief – who fought Netanyahu to a virtual draw in elections held in April 2019, September 2019 and on 2 March – was refused permission by the president on Sunday to have the mandate extended by a further 14 days. The request was turned down, Rivlin’s office said, because Netanyahu had told the president that the two men were not close to signing an agreement on forming an emergency unity government.

However, after a televised address on Monday night in which he offered the stark choice between “an emergency national unity government and a redundant fourth election”, Gantz met again with Netanyahu. The two men later issued a statement saying they had made “significant progress” in their talks. On the back of that statement, Rivlin then granted them a further 48 hours. The president’s office made clear, however, that the two-day extension to Gantz’s mandate, which expires tonight, had been agreed “on the understanding that they are very close to reaching an agreement between them”.

A unity government is expected to see a “rotation” of the premiership with Netanyahu serving as prime minister for the first 18 months of the government, before passing the baton to Gantz to serve the second half its term. Such an arrangement is not unprecedented: Labor and Likud shared power in the mid-1980s with Shimon Peres and Yitzhak Shamir each leading the government for two years.

Rivlin has already indicated that, if the current negotiations fail, he will not pass the mandate to Netanyahu and give him 28 days to form a government. That decision is based on the fact that the prime minister currently has the backing of only 59 MKs. Instead, the president would shift the decision to the Knesset. It would have 21 days in which any member of parliament able to win the support of 61 – a majority – of his or her colleagues would be granted the mandate to attempt to assemble a government. If no MK wins that backing, Israel would be forced into a fourth election.

Gantz stunned the political world two weeks ago when he announced he was planning to go into government with Netanyahu, despite repeated pledges not to do a deal with the prime minister, who is due to appear in court later next month on multiple corruption charges.

The move led to the collapse of the Blue and White alliance – a coalition of three centrist parties formed early last year – as his erstwhile allies, Yesh Atid leader Yair Lapid and Telem head Moshe Ya’alon, denounced the apparent end of Gantz’s efforts to eject Netanyahu from effort. After the 2 March election, Gantz had won the backing to become prime minister of a narrow majority of MKs. But, though united in their opposition to Netanyahu, the coalition supporting him – which ranged from anti-Zionist parties of the Arab-Israeli Joint List to the right-wing nationalist former defence minister Avigdor Liberman – proved too disparate to form a government. Nonetheless, until Gantz’s abrupt about-turn, the opposition parties had been poised to seize control of the Knesset’s agenda and pass legislation preventing an individual facing criminal charges from serving as prime minister. The move – which would have brought the rules for the prime minister into line with other ministers – would have effectively excluded Netanyahu from office. Although that legislation has been tabled, it was effectively stilled when, with the backing of Netanyahu and his allies, Gantz was elected as Knesset speaker. The speaker controls the Knesset timetable and, before Gantz threw his lot in with the prime minister, the opposition parties had succeeded in ejecting Likud MK Yuli Edelstein from the post.

The threat that he may use his position as speaker to allow the opposition to advance this legislative process remains one of the few – if highly potent – weapons that Gantz has left in his armoury as he negotiates with Netanyahu.

Despite cries of betrayal from much of the Israeli left, Gantz and Netanyahu had appeared close to sealing a coalition deal last week. However, the talks broke down when the prime minister made a last-minute demand that his Likud party should have greater control of judicial appointments. Under Netanyahu, the Israeli right has repeatedly accused the courts of being controlled by a left-leaning elite which seeks to impose its own agenda in place of the democratic will of the people.

Netanyahu had previously agreed that Gantz’s party would run the justice ministry and that his own Likud party would not have a seat on the powerful judicial appointments committee. The issue is vital to Gantz. Having broken his promise not to serve under him, the opposition leader needs to show that the prime minister and his allies will not be able to manipulate the courts to escape his corruption trial.

That apparent pothole in the road to an agreement has been supplemented in recent days by a growing fear on Netanyahu’s part that Israel’s Supreme Court will wait until he and Gantz have inked their deal and then rule that he cannot serve as prime minister while facing criminal charges. Such a ruling would leave Gantz heading the government for its entire term. Gantz and Netanyahu have thus reportedly discussed inserting a clause into the coalition agreement which would automatically dissolve the Knesset and trigger elections if the court sought to block Netanyahu continuing in office. Referring to previous attempts by Netanyahu – which were fiercely condemned at the time by Gantz – to halt the judicial proceedings against him while he remained prime minister, Lapid attacked the notion of such a clause. “This has a name. It’s called an immunity law,” he suggested.

Netanyahu’s manouvering reflects a mix of competing pressures and changing political calculations. On the one hand, the pro-settler Yamina party which is part of his right-wing bloc is particularly exercised about judicial “over-reach” and is believed to be considering quitting the government and returning to the opposition benches. Although this would not impact the numbers needed to form. unity government, Netanyahu will fear the prospect of being outflanked on the right.

On the other, the wily Netanyahu has a long history of co-opting and then neutering political opponents. He will be acutely aware that – boosted by his handling of the coronavirus crisis – Likud is surging in the polls. A new Channel 12 poll this week showed that, if elections were held today, the party would jump from 36 to 40 seats. Blue and White, meanwhile, would slump from 33 to 19. Overall, Netanyahu and his right-wing allies would have a clear majority in the Knesset with 64 seats.

The poll also showed that Labor would lose its three Knesset seats. The party, which had indicated a willingness to follow Gantz into a unity government with Netanyahu in return for control of key socio-economic ministries, has formally separated from the left-wing Meretz party, with which it ran on a joint slate in the March elections. Meretz refuses to countenance any agreement with the prime minister. On Monday, Labor told Rivlin that it would not recommend Netanyahu becoming prime minister and would only join a unity government along with Gantz. “We won’t betray Gantz and our camp,” Labor MK Itzik Shmuli suggested. “Bibi [Netanyahu] has to decide if he wants to face the coronavirus and its harsh repercussions together or alone. We won’t be the sixty-first vote that allows him to evade justice and harm the rule of law in return for a job.” That Likud has apparently been seeking to woo opposition parties, and potential defectors from Gantz’s own ranks, in the event of unity government negotiations breaking down underlines the prime minister’s political ruthlessness.

As Haaretz columnist Yossi Verter noted this week: “It is unnecessary to remind Gantz and Gabi Ashkenazi of what tribal elders like Avigdor Lieberman, Dan Meridor, Ehud Barak and others told them: You should never buy a used car from Netanyahu. You should not even buy a brand new one, still wrapped up in plastic with zero miles on the odometer and the intoxicating smell of new leather upholstery. Fraud and breach of trust are not just what he is accused of; for Netanyahu they are a way of life.”