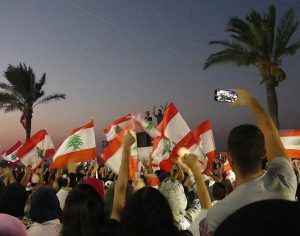 President Macron brought a rare glimmer of light to Lebanon at the weekend when he brokered a call between the country’s prime minister and the Saudi crown prince, Mohammed bin Salman. It is the first sign that the autumn’s diplomatic crisis between Lebanon and the Gulf states may be turning a corner.

The Washington Post described the joint call between Macron, MBS and Mitaki as “a significant gesture amid an unprecedented crisis between Lebanon and Saudi Arabia”.

A Saudi-Iranian “tug of war”

Analysts suggest that the diplomatic crisis between Lebanon and the Saudis had little to do with Kordahi’s comments and instead reflected wider tensions between Tehran and Riyadh. Karim Bitar said the row had “everything to do with the Saudi-Iranian tug-of-war that has been ongoing for the past few years. Kordahi was only a pretext for something that was long in the making,” he said. Lebanon is “one of the battlefields between Iran and Saudi Arabia,” along with Syria, Yemen and Iraq, where the two regional rivals support opposing sides, Bitar added. Riyadh’s move reflects the Saudis’ determination to force Lebanon “to take a harsher line on Hezbollah”. Bitar said Lebanon was “paying the price” for the geopolitical battle between Iran and Saudi Arabia: “When two elephants fight, it’s the grass that suffers and Lebanon for the umpteenth time in its history is the grass that is suffering when these proxy wars become more intense.”

The tough Saudi line towards Lebanon could hardly have come at a worse time for the country, which has been enmeshed in a deep economic crisis – the worst in its modern history – since late 2019.

After a year of political deadlock following the resignation of the government in the wake of last August’s Beirut port explosion, a new prime minister was confirmed in late September. But Mikati’s cabinet has not met since 12 October as Hezbollah seeks to force the removal of the judge, Tarek Bitar, who is investigating the blast. The terror group is widely rumoured in Lebanon to have been responsible for storing tons of ammonium nitrate which triggered the explosion.

A green light to Hamas

Into this incendiary mix has stepped Hamas, which, with Hezbollah’s backing, has reportedly established a branch in Lebanon. Several hundred-strong and based in the port city of Tyre, Hamas is being trained by unnamed Iranian actors and is focused on building home-made rockets. The group is believed to want to ensure it can open a second front against Israel in any future war. During May’s conflict with Israel, Hamas fighters in Lebanon launched four rockets into northern Israel.

A deal backed by the US is likely to see natural gas flowing from Egypt to Lebanon via Jordan and Syria within the next two to three months. The agreement, secured in October, is designed to ease Lebanon’s electricity crisis, which has seen supplies reduced to just a handful of hours each day for most homes and businesses in the country. While not publicly acknowledged, the Egyptian natural gas supplied to Jordan by Egypt is mixed with natural gas from Israel. In October, the state-run grid collapsed entirely, forcing a blackout which lasted for several days. In defiance of international sanctions, Hezbollah has also commissioned a number of Iranian tankers to bring oil into the country, although experts suggest much of it has been “channelled” to the terror group’s own facilities and allies or smuggled to Syria.

While Macron’s intervention is good news, the overall situation in Lebanon remains grim, with some observers fearing that, over time, the country could slip back into civil war.