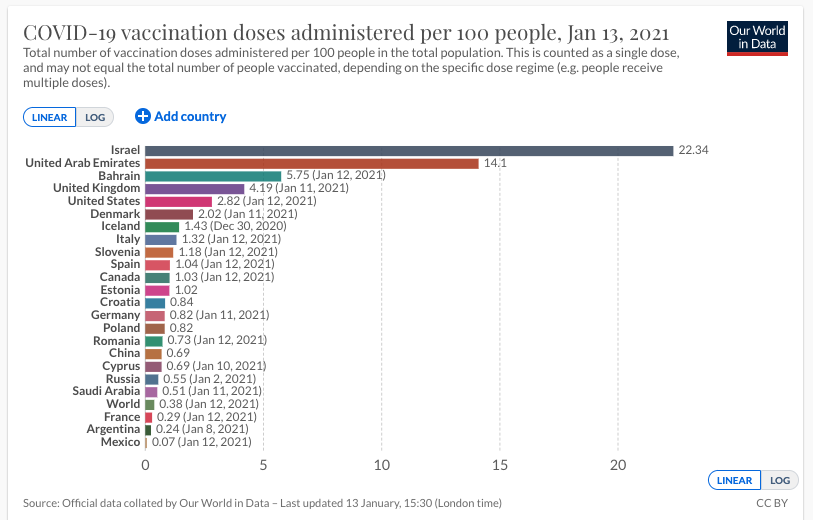 Israel continues to lead the world in the speed of its coronavirus vaccine rollout programme. Less than one month after Benjamin Netanyahu became the first Israeli to receive the covid-19 immunisation jab, the country has vaccinated over 22 percent of its population. By the start of this week, nearly three-quarters of Israelis over the age of 60 had been vaccinated.

As 700,000 more doses of the Pfizer vaccine were flown into Israel on Sunday, Netanyahu announced plans to increase the pace of inoculations to 170,000 per day and declared: “This is a world record. We will be the first country to emerge from the coronavirus health crisis and from the coronavirus economic crisis.”

For once, Netanyahu’s hyperbole matches reality. While other, larger countries have vaccinated more of their citizens in terms of raw numbers, Israel easily outpaces all others in terms of the proportion of its population that have received the jab. Its nearest competitor, the United Arab Emirates, has vaccinated nearly half the number of the Jewish state at 12.9 percent. Britain is at 4.19 percent, the US at 2.82 percent and Denmark at 2.02 percent. As of this morning, 1.93 million Israelis have been vaccinated (as against 2.84 million in the UK), with those over the age of 50 receiving shots starting today. However, according to official data, over 295,000 Israelis between the ages of 50 and 59, or 35 percent of the population in that age group, have already been vaccinated as of Tuesday morning.

This week, the Israeli Health Ministry unveiled ambitious plans to have vaccinated 5.2 million Israelis – of a population of 9.3 million, of whom almost two million are under the age of 16 – by the end of March. Vaccinations of those as young as 40 are expected to begin next month. Pfizer is reportedly delivering 400,000-700,000 vaccines to Israel each week. The country’s vaccination drive is being buttressed by supplies from Moderna. Israel is also preparing to introduce vaccination passports to allows those who have been inoculated greater freedoms as the country begins to reopen.

But Israel’s success at administering the vaccine is being tempered by surging infections amid a third national lockdown. On Tuesday, the Health Ministry revealed a record 10,000 new infections. Since the start of the pandemic, over 500,000 Israelis have been diagnosed with covid and more than 3,700 have died. Around 1,000 people are in a serious condition with 247 on ventilators. The British strain of the virus is believed to be responsible for around 2,000 infections a day.

Israel has also faced criticism for not extending its vaccination programme to the West Bank and Gaza, despite the Palestinian Authority being responsible for healthcare and not publicly requesting assistance from the Jewish state.

The keys to Israel’s success

Israel’s success thus far derives from a number of factors. Its small 9 million population is spread across just 21,000 sq km, which has assisted with the logistical challenges of transporting the Pfizer vaccine.

But the country isn’t just benefiting from its compact geography. Israel’s free healthcare system, which provides universal coverage, has also risen competently to the challenge. Israelis receive their care through four national networks which are required to take any citizen but which receive their funding from the state on the basis of the number of members they have. This competition, which helps hold down costs, has led to heavy investment in preventative medicine and digitisation. Each of the four networks are now competing to prove it can most efficiently get shots in the arms of its members. Vaccination slots are thus being offered seven days a week, with drive-in centres allowing Israelis to receive a jab without leaving their cars.

Digitisation and a central patient database are spurring the effort and initially helped the most vulnerable to be easily prioritised, identified and contacted. “We immediately set up a data system that identified which people to summon as a first priority, who was second priority, and who could wait. The whole thing took 10 minutes,” the chief executive of the Meuhedet health management organisation, Sigal Regev Rosenberg, told the Times of Israel this week.

While, like other countries, the country has prioritised those most vulnerable to serious illness from covid, it has also shown a high degree of flexibility and a typically Israeli disregard for rigid rules. Vaccinations centres are, for instance, inoculating younger Israelis who show up at the end of the day when unused doses might otherwise be thrown away. At the same time, Israeli experts are said to have proved adept at extracting more doses from each vial than they had originally expected to.

Logistically, the rollout has also been smooth, with key parts of the operation – including the use of pharmaceutical company Teva’s storage facilities, whose freezers can hold five million doses – ready by November. When the first shipment of vaccines arrived in December, they were placed in pizza-box size containers, which each held 100 doses, and sprinted to more than 400 clinics around the country.

Money has played a part too. Calculating that the economic and social cost of a prolonged lockdown were far outweighed by the advantage of speeding up vaccine deliveries, the Israeli government has proved willing to pay both Pfizer and Moderna considerably over the odds. Israel, the Kan public broadcaster reported on Monday, is paying $47 per person per vaccination – or £23.50 per dose – to the two drug companies. By contrast, the US is thought to be paying Pfizer $19.50 per dose while the EU is paying $14.76. Moderna vaccine prices are thought to be $15 per dose for the US and $18 per dose for the EU. The total cost – $333m – Israel is expected to pay for its vaccination programme is estimated to be roughly equivalent to the hit the economy receives for every two days of the current lockdown.

But the deal Israel struck with Pfizer isn’t just about money. In return for its shipments, the government has promised the drugs giant to feed it a supply of data about side-effects, efficacy and time to develop antibodies which will be broken down by segments including age, gender and preexisting conditions. “The country basically acts as a large, real-world lab for manufacturers and the rest of the world,” one analyst has suggested.

Israel also appears to be overcoming the perceived resistance of two groups – Arab-Israelis and the ultra-Orthodox community – who were thought likely to be hostile to being vaccinated, despite the prevalence of covid among both. This indicates the success of a broader public relations campaign launched in mid-December by the Health Ministry to overcome public scepticism about the vaccine among key groups. Tapping the help of doctors, scientists and celebrities, it had designated teams targeting messages at the ultra-Orthodox community, East Jerusalem, Arab communities in the north, Bedouins and Russian speakers.

Politicians and religious leaders have been part of the effort too. At the end of last month, Netanyahu visited a vaccination centre in Tira, centre Israel, to encourage Arab-Israeli take-up. “We brought millions of vaccines here, more than any other country in the world relative to its population,” he declared. “We brought them to everyone: Jews and Arabs, religious and secular.” “Come and be vaccinated,” he appealed in Arabic. The prime minister also chose the Arab town of Umm al-Fahm for an event to mark Israeli passing the one million vaccinations milestone. The mayor of the town, Dr Samir Subhi, said a voice message had been sent to 25,000 phones in the area urging people to get vaccinated and describing the fight against the virus as “holy for everyone”. Similarly, Rabbi Yitzchok Zilberstein, a leading ultra-Orthodox authority in Jewish law, issued a public ruling that the vaccine was safe and leading members of the community have been photographed receiving their jabs.

Of course, Netanyahu’s high-profile in the vaccination effort is not unrelated to the fact that the country’s voters are heading to the polls on 23 March in a general election – the fourth in under two years – which was called in December when the Knesset failed to pass a budget. The prime minister will be hoping that the country’s success in delivering the vaccine – together with the easing of the lockdown and a return to more normal life – will help ease public anger at the government’s handling of the pandemic which saw sharp drops in his own popularity. That gamble may be paying off. “We can’t blame Netanyahu for all Israel’s ills – correctly most of the time – and then ignore his contribution when something works,” Gideon Levy, a columnist for the left-wing Haaretz newspaper recently argued.

The position of the Palestinians

Nonetheless, Israel has come under fire for not extending its inoculation drive to the Palestinians. Legally, the position appears to be clear: under the Oslo Accords, it is the Palestinian Authority, not the Israeli government, which is responsible for healthcare in the Palestinian territories. Indeed, the PA has its own Ministry of Health and health minister. However, some have noted that Oslo also states that Israel and the PA should cooperate in fighting epidemics. Israel would argue that it has, in fact, worked closely with the PA throughout the pandemic, and the UN itself has praised the two sides for their cooperation.

The PA has also sought to take the lead in procuring vaccines. On Sunday, it announced that it expects to receive supplies of the Oxford University/ AstraZeneca vaccine in March. Last week, it had indicated shipments would arrive next month. The PA has also been in discussions with Russia about the controversial Sputnik V vaccine and, unlike Israel, it has approved its use. The Russian Direct Investment Fund said on Monday that supplies would be delivered to the West Bank within a month. The PA has previously said it expected millions of the Sputnik doses in December. The Palestinian prime minister, Mohammad Shtayyeh, has suggested the PA has signed contracts with four companies that produce covid vaccines. Yasser Bozyeh, the Palestinian general director of public health, named Moderna and Johnson & Johnson, as well as Sputnik and AstraZeneca, as companies it has been in discussions with. The PA is also expected to receive supplies through the World Health Organisation’s vaccine programme.

But, as human rights groups have attacked Israel in recent days, the PA has also begun to aim its fire at the Jewish state. “The search by the Palestinian leadership to secure the vaccines from various sources doesn’t exempt Israel from its responsibilities towards the Palestinian people in providing the vaccines,” the PA Foreign Ministry suggested this week.

Health experts advising the Israeli government on its pandemic response are also pressing the Palestinian cause. Nadav Davidovitch, director of the school of public health at Ben-Gurion University in Beersheba, said supporting Palestinian vaccinations was not only “the right thing to do morally,” but was also in Israel’s interest. “We live next to each other, and if we want to create herd immunity, it’s important they also get vaccinated,” she said.

That message does not appear lost on Israeli ministers, who have suggested that the issue is one of timing. “I think that we’ve been helping our Palestinian neighbours from the very early stages of this crisis, including medical equipment, including medicine, including advice, including supplies,” health minister Yuli Edelstein said at the weekend. “I don’t think that there’s anyone in this country, whatever his or her views might be, that can imagine that I would be taking a vaccine from the Israeli citizen, and, with all the goodwill, give it to our neighbours. We do understand that it’s in Israeli interests that there will be less cases on the Palestinian side. Many of the Palestinians are working here in Israel. You can’t divide the two neatly and say, you know, ‘they can deal with it themselves; it’s not our issue’. It is our issue.”