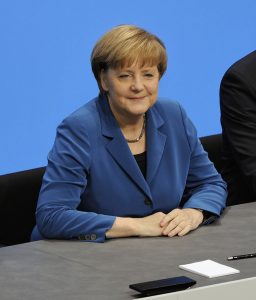 The German parliament last week passed a motion condemning as antisemitic the Boycott Divestment and Sanctions movement against Israel.

The motion was the joint initiative of Angela Merkel’s Christian Democratic Union and centre-left Social Democrat party, and was backed by the Greens and the centrist Free Democrats.

Entitled “Resist the BDS Movement – Fighting Antisemitism”, the motion defines the “arguments, patterns and methods of the BDS movement” as antisemitic. It drew comparisons between the “don’t buy” stickers which BDS supporters put on Israeli products and Nazi-era tactics. These, it says, are “reminiscent of the most horrific phase in German history … arousing associations with the Nazi slogan ‘Don’t buy from Jews’.” The motion said the Bundestag should “decisively resist” the BDS campaign and calls for both the federal and local governments to withhold any support or funding for events, organisations and projects created by the BDS movement.

Eva Högl, deputy chair of the SPD parliamentary group, said: “For years, the BDS movement has been calling for a boycott of Israel in Germany and around the world, using antisemitic methods. Antisemitism must have no place in Germany.”

The BDS movement launched an unsuccessful campaign against last week’s Eurovision song contest, which was held in Tel Aviv.

Other efforts by BDS campaigners have also had a limited impact. The Israeli economy continues to grow strongly, with Kristin Lindow, senior vice-president at Moody’s Investors Service, saying any effects are more “psychological” than real. Efforts to isolate Israel economically had had “no discernible impact on Israeli trade or the broader economy.”

This is, in part, a reflection of the composition of the Israeli economy, whose output – 45 percent of its exports to the EU are high-grade intermediate industrial products, with only 10 percent consisting of agricultural and food products – is difficult for consumers to boycott, should they so wish.

Cultural boycott efforts have also been largely unsuccessful too. While the pop singers Lorde and Shakira both pulled out of events in Israel last year due to boycott campaigners, many other musicians and entertainers have performed in the country over the past two years, including Tom Jones, Guns N Roses, Take That, Jamiroquai and Britney Spears. Madonna appeared at Eurovision and Bon Jovi and Jennifer Lopez have upcoming dates.

Radiohead, who were subject to strenuous efforts by BDS campaigners to force them to abandon a 2017 concert, said at the time: “The kind of dialogue that they want to engage in is one that’s black or white.” Nick Cave, who performed in Israel last year, called the boycott movement “cowardly and shameful”, while an open letter on the eve of Eurovision signed by Stephen Fry, Sharon Osbourne, Al Murray, Rachel Riley and more than 100 other musicians and celebrities said: “We believe the cultural boycott movement is an affront to both Palestinians and Israelis who are working to advance peace through compromise, exchange, and mutual recognition. While we all may have differing opinions on the Israeli-Palestinian conflict and the best path to peace, we all agree that a cultural boycott is not the answer.” In October 2015, JK Rowling, Melvyn Bragg, Simon Schama, Zoe Wannamaker and Hilary Mantel joined a range of actors, authors and musicians in similarly denouncing cultural boycotts.

Despite that failure, the BDS movement remains a pernicious and potent threat to those campaigning for peace and a two-state solution, and against antisemitism. The boycott campaign’s roots were laid at the infamous 2001 Durban conference which the then UN human rights chief, Mary Robinson, denounced for its “horrible antisemitism”.

The BDS movement opposes a two-state solution, rejects the Jewish people’s right to self-determination, and believes in Israel’s replacement by a Palestinian state.  Co-founder of the BDS movement Omar Barghouti – a Qatari-born Palestinian who studied at Tel Aviv University – has argued that all of Israel constitutes “occupied Arab land” and said he opposes “a Jewish state in any part of Palestine”. “We are witnessing the rapid demise of Zionism … I, for one, support euthanasia,” he has suggested. BDS campaigners thus oppose any peace process with Israel; supports the “right of return” for Palestinian refugees and their descendants (by their count, some 7 million people) to the state of Israel; and call for the dismantling of the Palestinian Authority, which it sees as a “subcontractor of Israel”.

A key strategy of the BDS movement is its effort to prevent the “normalisation” of relations between Israelis and Palestinians, arguing that there should be no dialogue, contact, or negotiation with Israel. The impact of this is to radicalise Palestinian civic society, promote the positions of hardliners, and put pressure on those Palestinians who seek to engage in coexistence initiatives with Israelis.

This anti-normalisation campaign has been condemned by those working for peace in both Israel and Palestine. As one former Palestinian peace negotiator, Ghaith al-Omari, has argued: “[They] have chosen to isolate themselves in hopes of living in a simpler, more comfortable, yet fictitious world. In this alternate reality, the views of the other have no validity, their respective narratives exist unchallenged, and any discussion on Palestinian-Israeli issues quickly devolves into a futile competition of narratives and arguments. These kinds of zero-sum conversations only perpetuate the conflict and weaken the chance for a solution.”

Likewise, the progressive NGO, the New Israel Fund, has said it “views the use of these [BDS] tactics as counterproductive, and is concerned that segments of this movement seek to undermine the existence of the state of Israel as a Jewish homeland”.

A recent analysis of the BDS movement suggests that it masks the complexity of the Israeli-Palestinian conflict; demonises one side by branding the Jewish claim to self-determination as uniquely wrong and racist; and promotes a one-state solution which, polls show, a majority of both the Israeli and Palestinian people have consistently opposed.

The BDS movement has also served to empower the Israeli right. As the former Labor MK Michal Biran has noted: “In Israeli politics, moves against Israel in the international arena hinder the left too, encouraging the right’s ‘us against them’ mentality, where Likud claims only belligerence and militarism can keep us safe. It undercuts the left’s attempts to promote diplomacy and reconciliation.”

The BDS movement denies that it is antisemitic. However, it has strenuously opposed the International Holocaust Remembrance Alliance definition of antisemitism and called for others not to adopt it.

The ugly politics of the BDS movement were evident at a rally organised by the pro-BDS Palestinian Solidarity Campaign in London earlier this month. At the event, to which both Jeremy Corbyn and John McDonnell sent messages of support, placards were displayed saying “Israel provokes antisemitism” and “From the river to the sea, Palestine will be free”, as well as images of a Star of David alongside a swastika.