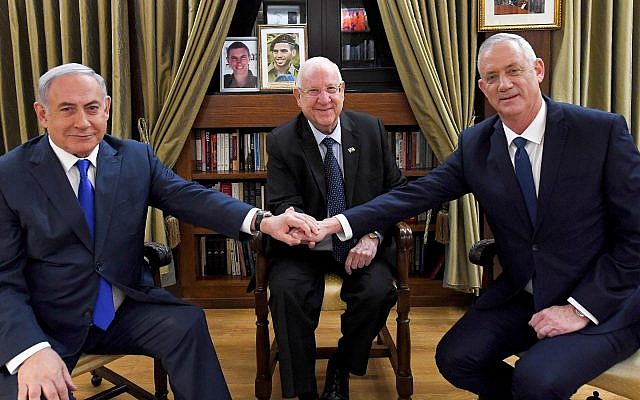 The deadlock which has paralysed Israeli politics for the past year appears to be drawing to a close after a stunning about-face by Benny Gantz last week.

After fighting three elections since last April on a pledge to end Benjamin Netanyahu’s decade in office, the opposition leader last week threw him a political lifeline and agreed to the formation of a unity government.

The move provoked fury among the prime minister’s political opponents and led to the immediate collapse of the Blue and White alliance which Gantz had led for just over a year. It had fought Netanyahu’s Likud party to a virtual draw in the elections held last April and September. A third poll, held at the beginning of March, saw Likud edge ahead, but still left the prime minister’s bloc of right-wing and ultra-Orthodox parties short of a majority.

Gantz had repeatedly vowed that he would not serve under Netanyahu while the latter faced a series of corruption charges, for which he will go on trial in May. Earlier this month, the opposition head was asked by Israel’s president, Reuven Rivlin (pictured with Gantz and Netanyahu after September’s election), to form a government after he received the backing of parties representing a narrow majority of MKs. Blue and White last week led the opposition parties in forcing the resignation of Likud MK Yuli Edelstein as speaker of the Knesset; a first step towards seizing control of the Israeli parliament’s agenda and passing legislation – clearly aimed at Netanyahu – preventing any individual facing a criminal indictment from serving as prime minister.

However, in a surprise last-minute manoeuvre, Gantz dramatically dropped his plans to elect Blue and White MK Meir Cohen as speaker and instead offered himself for the post. The move was seen as an olive branch to Netanyahu – with whom Gantz had been in faltering talks about forming an emergency government to tackle the coronavirus crisis – after the prime minister suggested that the ejection of Edelstein and election of Cohen would inevitably lead to a fourth set of elections.

Gantz was elected as speaker – a post he is planning to hold only temporarily while negotiations to form a unity government continue – with the overwhelming backing of MKs from Netanyahu’s party and its allies, alongside 15 loyalists from Blue and White.

Under the terms of the expected unity government deal, Netanyahu will remain in office for the next 18 months with Gantz becoming prime minister in September 2021. Such an agreement is not without precedent: in the 1980s, a unity government between Labor and Likud saw the premiership “rotate” between Shimon Peres and Yitzhak Shamir, with each serving as prime minister for half of the administration’s term.

“These are not normal days”

Publicly, Gantz defended his decision by saying upon his election as speaker: “These are not normal days, and they require abnormal decisions.” Despite winning the backing of a narrow majority of MKs when Rivlin held discussion with party leaders after last month’s general election, Gantz had little room to manoeuvre politically and his chances of forming a government alone appeared slim. The coalition which had supported him was united in its opposition to Netanyahu but splintered when it came to determining a way forward. Two right-wing Blue and White MKs, Yoaz Hendel and Zvi Hauser, and Avigdor Liberman, the leader of the right-wing Yisrael Beitenu party, had made clear they would not support Gantz forming a minority government which depended on a “confidence and supply” deal with the Arab-Israeli Joint List for its survival. Moreover, Gantz’s prospects in a fourth election looked bleak with recent polls showingLikud surging as Israelis rally around Netanyahu during a time of national crisis.

However, Gantz faced harsh criticism from within the ranks of Blue and White – a coalition of three centrist parties formed early last year – and the alliance promptly collapsed. Gantz’s Israel Resilience party will go into coalition with Netanyahu, while Yair Lapid’s Yesh Atid party and the Telem party of former defence minister Moshe Ya’alon have opted to go opposition. The fractious nature of Israeli politics was demonstrated by the fact that Hendel and Hauser, members of Telem, have now quit Ya’alon’s party and have formed their own grouping – Derech Eretz – which will join the unity government.

Lapid angrily denounced his former ally, suggesting: “Benny Gantz surrendered without a battle and crawled into Netanyahu’s government. The Blue and White voters feel betrayed, and rightly so. Their votes were stolen and given as a gift to Netanyahu.”

The moves have also caused confusion and upheaval in the Labor and Meretz parties, which ran in alliance in March’s election. The latter has made clear its outright opposition to the Netanyahu-Gantz unity government while Labor leader Amir Peretz is reportedly considering joining it. Peretz, who, like Gantz, had repeatedly said he would not serve under Netanyahu is, however, facing opposition from within his party. Labor MK Merav Michaeli hosted a Zoom rally against the new government on Sunday evening and has called for a virtual party conference to be convened. “I do not violate my promises to the voter,” she suggested. If Peretz, who is said to have been offered the Economy ministry, joins the government, he may be followed by the party’s third MK, Itzik Shmuli. Shmuli, who rose to prominence as a leader of the 2011 social justice protests, contested the party leadership last year.

The deal between Gantz and Netanyahu is, however, not yet sealed and tricky issues remain to be resolved, including:

•    Gantz is insisting a member of his party serves as justice minister – a crucial portfolio given the corruption charges facing the prime minister – but Likud is equally determined that it will retain the job for one of its MKs.

•    Similarly, Gantz wishes his party to retain the Knesset speakership – while Likud is determined to give the post back to Edelstein.

•    Netanyahu and Gantz are also believed to disagree about the question of unilaterally annexing parts of the West Bank as outlined in Donald Trump’s February peace plan. Gantz has previously suggested such a move should be “coordinated” with the international community, a condition which would put the issue on the back burner given that only the US is currently in favour. Gantz has, moreover, taken the Defence Ministry for his party – it’s thought likely he may assume the role personally – which will be critical in any annexation plans.

Netanyahu’s allies in the pro-settler Yamina party also appear to be causing problems, suggesting that the prime minister is giving too much ground to Gantz and that they might not opt to join the government. Yamina is believed to have balked at the prospect of seeing its three cabinet posts – defence, education and transport – reduced to just one. Party officials are now anonymously talking of Netanyahu preparing to form a “left-wing government” and vowing to topple him from the opposition benches. Indeed, Yamina’s Ayelet Shaked, a former justice minister, suggested on Monday that “preserving this partnership [with Netanyahu] doesn’t come at any price”.

Likud loyalists are also beginning to show their discomfort and echoing Shaked’s “not at any price” language.

A potential compromise – a proposal to increase the number of ministries to 36 so that Netanyahu can square his promises to Gantz with those he made previously to his own allies – has also drawn criticism. “There have been large governments before in Israel’s history, but it’s wrong to establish the most bloated government ever during the greatest-ever economic crisis,” argued Gideon Sa’ar, who fought Netanyahu for the Likud leadership in December.

Some commentators have suggested that the negotiations are taking place at a point where Gantz is a somewhat diminished figure, despite his being in line to become prime minister in 18 months time. “Gantz, who began Thursday morning as leader of an opposition with a majority of Knesset seats, ended it as leader of mid-sized party about to be swallowed up by a rampant Netanyahu coalition,” wrote Anshel Pfeffer. The former Blue and White head, “still a newcomer to politics and exhausted from three consecutive elections, has chosen to join the government of the man who orchestrated a relentless smear campaign against him over the past 14 months”.

Gantz, however, is not totally without cards to play. He still, for instance, holds over Netanyahu’s head the nuclear option of using his role as Knesset speaker to advance the legislation, filed by Blue and White before it imploded, to bar those under criminal indictment from serving as prime minister.