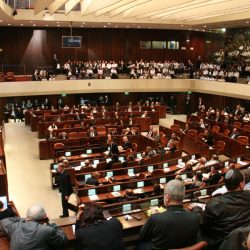 The painstaking process of assembling a new Israeli government is due to culminate in its swearing-in tomorrow. Israel has had a caretaker government since late 2018 when the first of three closely fought, inconclusive elections was triggered. The third of those elections in early March eventually led to a “unity government” coalition deal between Benjamin[…]