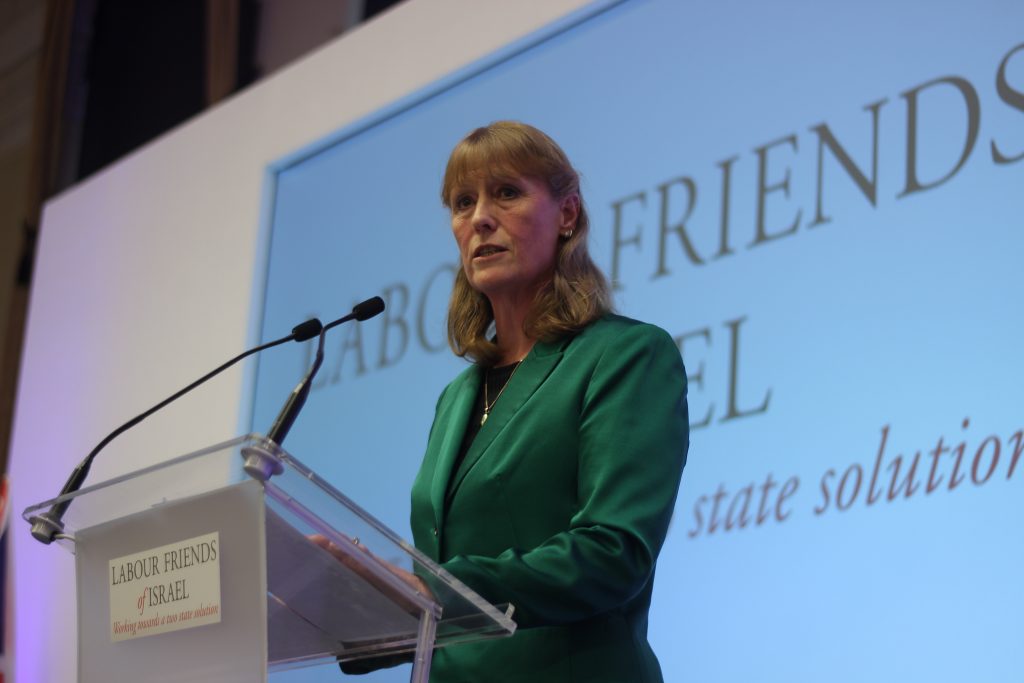 LFI’s chair Joan Ryan vowed to lead the fight against antisemitism in the Labour party “whatever the personal cost” in her speech to our annual lunch on Tuesday.

In a strongly worded address, Ms Ryan also pledged to stand up to “the politics of hatred and division” and defend “the values of equality, respect and tolerance”.

Over 300 people – including more than 100 parliamentarians – attended the biggest LFI lunch in years. Among the guests were the deputy leader of the Labour party, Tom Watson, and the shadow foreign secretary, Emily Thornberry. The chief rabbi, Ephraim Mirvis, and leading Jewish community figures were also in attendance.

To sustained applause, LFI vice-chair Dame Louise Ellman was honoured with an LFI Lifetime Achievement Award, presented to her by Mr Regev.

Ms Ryan, who received two prolonged standing ovations, described a global “battle to defend the world’s only Jewish state”, which was also being fought out in the Labour party.

“It’s a battle in which we stand by the Jewish community in this country. We oppose those who claim they know better than Jews how to define antisemitism. We challenge those who insult the memory of the six million by equating the actions of Israel with those of Nazi Germany; and we reject the vicious smear that charges of antisemitism are all about silencing legitimate criticism of Israeli government policies,” she declared.

“In this fight against antisemitism,” Ms Ryan argued, “I will never cower in the face of hatred and abuse. However long it takes, whatever the personal cost.”

In September, Ms Ryan was subjected to a no-confidence vote by hard-left activists in her constituency which was filmed and broadcast live by the Iranian state broadcaster, Press TV. Ms Ryan narrowly lost the motion, in which there were alleged voting irregularities.

LFI’s chair also sharply criticised the response of Labour leader Jeremy Corbyn, arguing: “It is neither morally right nor at all acceptable to lay a wreath at the grave of those who order the torture and murder of people simply because they are Israelis.

“It is neither principled nor brave to campaign for the right of people to call Israel a ‘racist endeavour’ or to spin absurd antisemitic conspiracy theories blaming it for terror attacks.

“And, no, it does not advance the cause of peace to snub our party’s comrades in Israel while calling Hamas terrorists friends and brothers.” 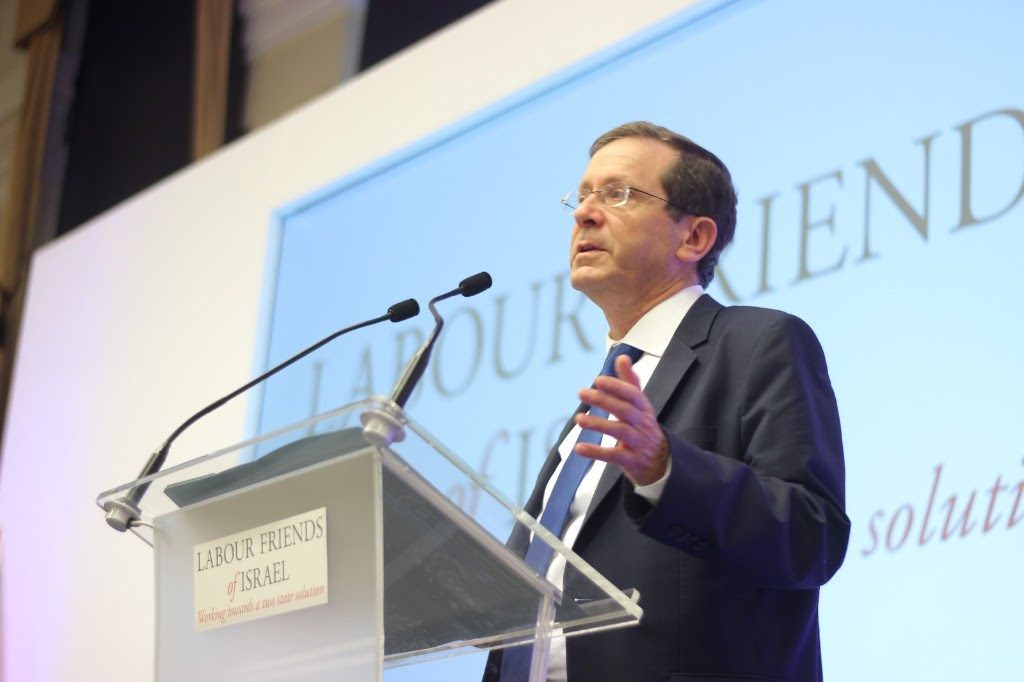 Mr Herzog told the audience: “Antisemitism cannot be dismissed as legitimate criticism of Israel. What we’ve seen from several leaders and activists in the Labour party is not a foreign policy debate – it is a campaign of hate, using the Israel-Palestine conflict as camouflage.

“Wherever BDS goes, antisemitism follows. The fight against antisemitism is just one part of a wider fight for truth, liberalism, progress and against the politics of fear, fake news, hatred and division. It is the fight for sanity and common sense.”

He added he was “a believer in a two-state solution. Our Palestinian brothers deserve dignity, but they must come to negotiations.”

Mr Herzog said: “My family’s history is intertwined with British history of the past century. My father fought the Nazis as a British officer. They would be shocked to see what happens in the UK today on antisemitism.”

He also praised LFI, suggesting: “You’ve shown immense commitment to Israel and the Jewish people through these challenging times in the British Labour party. You are on the front line in the battle against antisemitism in Britain.”

Ms Ryan’s speech referenced the centenary this year of the birth of Mr Herzog’s father, Chaim, who served as Israel’s sixth president.

Chaim Herzog famously addressed the United Nations after the passage of the notorious 1975 resolution equating Zionism with racism.

Ms Ryan said: “The hatred of Israel – and the denial of the Jewish people’s right to self-determination – which Chaim Herzog spoke out against in 1975, is once again alive and well.

“It doesn’t stem from a justifiable concern for the rights of the Palestinian people. It has nothing to do with the tragic plight of Gaza, settlement building, or the nation state law.

“It is born instead of hatred and ignorance. And this hatred is the oldest hatred of them all.” 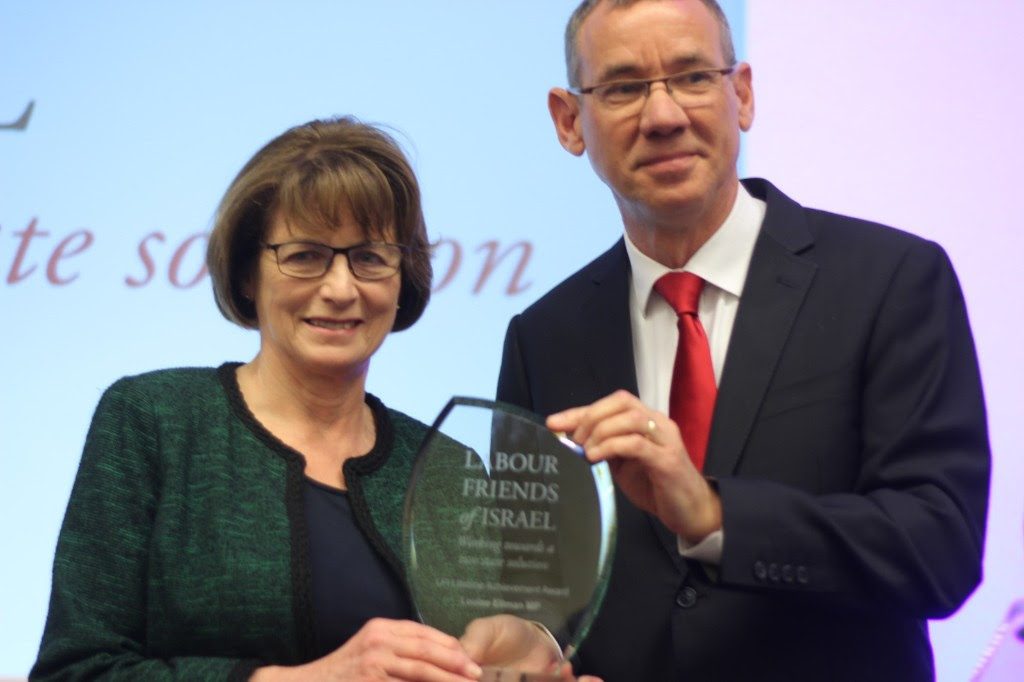 Mr Regev noted that this year saw two 70th anniversaries worthy of celebration – the birth of the State of Israel, “which Labour supported from 1917”, and the establishment of the NHS. The health service, he added, was the creation of Nye Bevan “every much a proud socialist as he was a proud Zionist”.

“Bevan wrote [that] to achieve peace,” Mr Regev argued, “there is no substitute for direct negotiations.”

“We should call out those who are undermining direct negotiations now. Whether it be a Palestinian leadership that refuses to sit down to talk with Israel, or those in the party of Nye Bevan who today tell the Palestinians that they can have a state without negotiating with Israel at all,” the ambassador said.