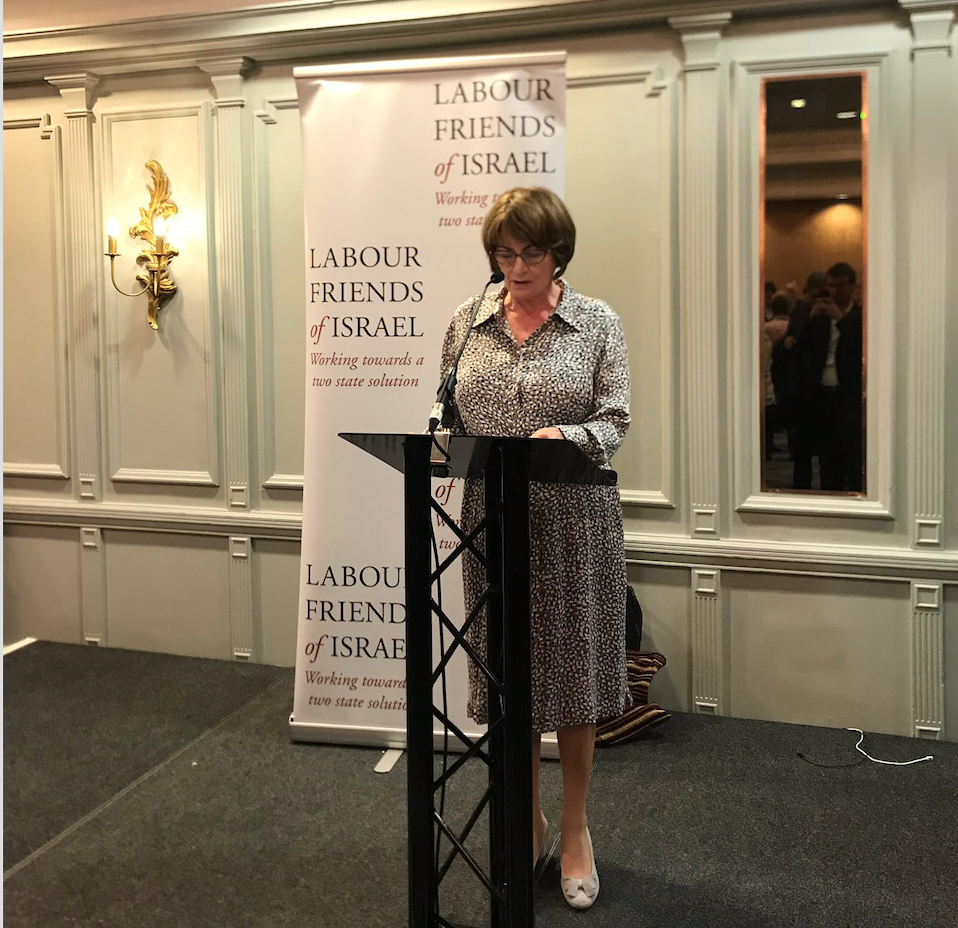 Dame Louise Ellman has launched a strong attack on antisemitism in the Labour party. In her first major speech since becoming chair of Labour Friends of Israel, she said she understood and shared the fear of many Jews about Jeremy Corbyn becoming prime minister.

Speaking at the LFI annual reception at the Labour party conference, she also attacked the “growth of an obsessive, irrational hatred towards the State of Israel”.

Ellman told the packed event that antisemitism had “destroyed the values, principles and moral fibre of the party of which I had always been so proud”.

“When I had the honour to become an MP on the day Labour returned to government 22 years ago, I never believed we would see the day when many British Jews would so fear our leader, that they would seriously consider leaving the country if he entered Downing Street,” she suggested. “I not only understand those fears. I share those fears.”

Ellman added: “When I became a Labour councillor 49 years ago, I never imagined that Jewish supporters, members, councillors and MPs would be abused, threatened and driven from the party, and that it would find itself the object of an investigation by one of Labour’s proudest creations, the Equalities and Human Rights Commission.”

In his speech to the LFI reception, Israel’s ambassador to Britain, Mark Regev, said that the “ethical foreign policy” Labour claimed to support should encompass showing “solidarity with Israel when it is forced to defend itself”, “condemning those who call for Israel’s destruction”, and “standing by the Jewish people’s right to freedom and security”.

In her address, LFI’s new chair paid tribute to her predecessor, Joan Ryan, saying she was “a brave and principled opponent of antisemitism in all its vile forms”.

Ellman also praised Labour’s deputy leader, Tom Watson, saying he was “a staunch friend of Israel, he is also a true ally of the Jewish community here in Britain”. Watson, she continued, had become a target for some in the party because of his opposition to antisemitism in the party. “They are utterly wrong and history will judge them,” she added.

Watson, whose speech to the Labour party conference was cancelled due to the Supreme Court’s judgment on the prorogation of parliament, praised LFI in an interview with the Jewish Chronicle. Labour’s deputy leader also said that the language at many of the conference fringe meetings about Israel-Palestine was “so harsh”.

Ellman said that too many in the party had “averted their eyes from this tragic situation”,  “sought to blame the victims and question their motives” and claimed “to abhor racism ‘in all its forms’, while ignoring the racism against Jews which stalks party meetings, social media and the highest institutions of the party”. “Let us never forget that not to speak and not to act are themselves choices,” she argued.

Referring to the revelations in the BBC Panorama programme about Jew-hate in the party earlier this summer, Ellman said that the antisemitism crisis had “driven some of the staff who tried to tackle it to depression and the brink of suicide” and “unleashed a culture of bullying, intolerance and abuse”.

Ellman also attacked the behaviour of some delegates at the party conference during a debate on Israel on Monday, when the party abandoned its long-standing opposition to the BDS movement (see story below). “Yesterday, on the conference floor, we saw a standing ovation given to a delegate who denied there was any antisemitism in the Labour party,” she said. “Not only that but a motion supporting boycotts was passed for the first time in Labour history. Let us be clear about what this means, the only country the Labour party calls to boycott is the world’s only Jewish state.”

Ellman took the Labour leader to task for his record and handling of the antisemitism crisis. “What are we left to think when Jeremy Corbyn finds the time to lay wreaths at the graves of those who masterminded the torture and murder of Israeli athletes at Munich, but repeatedly refuses invitations to visit Yad Vashem – the museum and monument to the greatest crime in human history,” she asked.

LFI’s chair also drew attention to revelations that Corbyn, at a conference in Doha in 2012, had described speeches by recently released Hamas terrorists as “fascinating and electrifying”. These were, Ellman said, “men who blew up families as they sat enjoying a meal in a pizza restaurant …  who murdered Israeli teenagers as they excitedly waited to enter a club on a night out with friends [and] … who butchered Holocaust survivors as they shared a Passover Seder”.

Ellman pledged that LFI would continue to stand solidly behind the Jewish state, arguing “we stand together in the determination that those who seek to destroy the state of Israel must never succeed”.

Referring to the strong showing by the centrist Blue and White party and its allies in the Labor party and Democratic Camp in last week’s Israeli general election, Ellman added “we stand together with renewed hope that the friends of peace and social justice in Israel will triumph over those who practice the politics of fear and division and imperil that what makes it so precious: its Jewish and democratic character”.

She also said LFI would continue its campaigning on behalf of greater investment in people-to-people work which brings Israelis and Palestinians together and in support of the establishment of an International Fund for Israeli-Palestinian Peace.

In his JC interview – in which he revealed that he had planned to attack Labour’s handling of antisemitism in his conference speech – Watson said: “It is rather tiring to see a number of these fringe events where the language is so harsh.”

“For me it drowns out the voices who would like a good relationship with Israel. Labour Friends of Israel has always supported a two-state solution, but delegates don’t get to hear this side when those voices are being drowned out,” he argued.