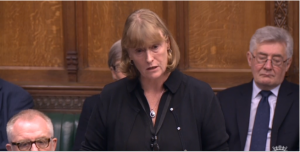 LFI’s chair, Louise Ellman, and her predecessor, Joan Ryan, both left the House of Commons this week when parliament was dissolved. Neither will be seeking re-election in the general election on 12 December.

Ms Ryan – who will continue to work with LFI in her new role as our honorary president – became chair after the 2015 general election. She left the Labour in February in protest at the party’s antisemitism crisis.

Ms Ellman, who succeeded Ms Ryan in August, announced that she too was leaving the Labour party last month.

“Joan has been a brave, principled and courageous opponent of antisemitism in the Labour party and the effort to demonise and delegitimise the world’s only Jewish state. We are delighted that she will remain actively involved with LFI as our honorary president – a position once held by Harold Wilson and Ian Mikado – in recognition of her passionate commitment to the Zionist cause,” said LFI director Jennifer Gerber.

Although Ms Ryan only became LFI’s chair in 2015, her involvement with us stretches back over 20 years when she was first elected to parliament and went on one of the first delegations we organised after Labour came to power.

Ms Ryan has since led many delegations to Israel, helping to increasing understanding of the challenges and complexities faced by the Jewish state among her fellow parliamentarians. She has also built a strong relationship with leading Israeli politicians, including our friends in the Israeli Labor party. They have invariably respected the depth of her knowledge and her unwavering commitment to Israel. Those attributes mean that Joan’s criticisms of the policies of the current Israeli government policy has received a respectful hearing. Indeed, in one of her first outings as LFI’s chair in September 2015, she directly challenged Benjamin Netanyahu’s approach towards the peace process and settlement building in the West Bank at a meeting between British parliamentarians and the Israeli prime minister.

Ms Ryan has been both willing to deliver tough messages to the Israeli government at times and has also never shied away from defending the state of Israel in the many debates which have been held in parliament during her time as chair.

Sadly, much of this period has been dominated by the rise of antisemitic anti-Zionism in the Labour party, following Jeremy Corbyn’s election as its leader.

Her stand has rightly earned widespread respect within the Jewish community. Ms Ryan is now frequently invited to speak to both Jewish and Israel advocacy groups not only in the UK, but in Europe and the United States. Audiences abroad are especially keen to hear her perspective on the rise of left antisemitism in the UK and the lessons that can be learned by progressives in their own countries. In March, Ms Ryan was only the second Briton after Tony Blair ever to be invited to address a plenary session at AIPAC’s annual conference in Washington DC, where her strong defence of Israel and attack on antisemitic anti-Zionism received a rapturous reception from its 17,000 delegates.

Ms Ryan has also helped ensure that the LFI has set the agenda in parliament. Thanks to her leadership, we have ensured that the issue of people-to-people work, which brings Israelis and Palestinians together and lays the vital civic society foundations for a future peace agreement, has received the recognition it deserves. We not only secured the funding from government for a three-year coexistence programme, but also ensured that Britain became the first country to back the establishment of an International Fund for Israeli-Palestinian Peace. As a powerful advocate for the fund, Ms Ryan was invited by the Alliance for Middle East Peace to visit Washington DC to assist with its efforts to ensure congressional support for the Fund.

Ms Ryan has also led LFI’s campaigning on the vital question of Palestinian Authority incitement to violence. In so doing, she has ensured that ministers are no longer able to evade responsibility for the UK’s role in funding work which is directly implicated in these dangerous and damaging activities.

Elected to parliament in 1997, Ms Ellman has been a powerful and principled friend of Israel and, until she took the helm this summer, a long-serving vice-chair of LFI.

She has participated in many LFI delegations to Israel. Her deep knowledge of the country, the conflict between Israel and the Palestinians, and the challenges and opportunities posed by the wider region are especially appreciated by MPs who are visiting Israel-Palestine for the first time.

Ms Ellman invariably speaks with passion, empathy and great insight in debates about Israel and the Middle East in parliament. Most recently, she led the successful effort to ensure that Hezbollah was fully proscribed in the UK and in January introduced legislation to tackle the scandal of incitement in the PA curriculum. It would require that aid to the Palestinian education system be conditioned on its adherence to UNESCO-derived standards for peace and tolerance in school education.

Ms Ellman has been on the receiving end of vicious antisemitism on many occasions: on social media, in her own constituency party and in the chamber of the House of Commons.

Those antisemites never understood, however, the steel that lays beneath Ms Ellman’s warm and charming exterior. As she told one interviewer in 2017: “It’s not in my character to be intimidated.”

Over the difficult past four years, she has been characteristically brave, principled and outspoken in the face of the shocking rise of antisemitism in the Labour party.

In one of the most powerful speeches delivered in last year’s House of Commons debate on antisemitism, Louise argued: “The small British Jewish community—less than 0.5% of the population—is increasingly disturbed by the growth and normalisation of antisemitism. They understand that antisemitism comes from all political parties and from right across society, but when that antisemitism grows unchallenged in a mainstream political party—a party of government—they simply feel frightened. Together with feeling frightened, they feel angry and anguished. I share that anguish as I meet, day by day, Jewish members of the Labour party who tell me that they can no longer continue in the party that they once held dear—the party that they now feel has betrayed them.”

With these words, Louise captured succinctly and effectively the terrible damage – to the Jewish community in Britain, and to its Jewish supporters – which the Labour party’s failure to tackle the scourge of antisemitism has inflicted.

When she resigned from the Labour party last month after 55 years as a member, she wrote: “My values – traditional Labour values – have remained the same. It is Labour, under Jeremy Corbyn, that has changed. He has presided over a culture of hatred, fear and intolerance in the Labour party.”

At last year’s LFI annual lunch, Ms Ryan pledged: “In this fight against antisemitism, I will never cower in the face of hatred and abuse. However long it takes, whatever the personal cost.”  It is a commitment which both she and Ms Ellman have honoured.