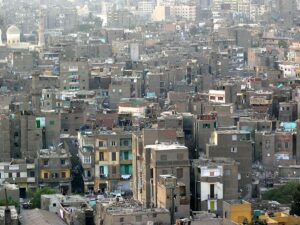 Russia’s invasion of Ukraine – the so-called bread basket of the world – has led to a rise in food prices sparking fears of social and political instability in the Middle East.

The UN International Fund for Agricultural Development said the impact of surging food prices and crop shortages was already being felt in the Middle East and north Africa and warned of “dire implications for global stability”.

In 2007-8, the combination of a drought, which hit supplies of wheat and rice, and high energy prices led to rioting in more than 40 countries around the world.

Ukraine is a leading supplier of wheat to Lebanon, Tunisia, Libya and Syria. Egypt, the world’s largest wheat importer, is reliant on Russia and Ukraine for more than 80 per cent of the wheat it purchases on international markets, UN data suggests.

Although they have fallen from a peak immediately after Vladimir Putin launched the invasion, grain prices are still two-thirds higher than a year ago amid concerns about the reliability of supplies from both Ukraine and Russia.

In crisis-hit Lebanon, flour has been absent from the shops since the start of March and the price of bread has increased by 70 per cent. Seventy percent of Lebanon’s wheat imports come from Ukraine.

Most Arab states heavily subsidise the price of both food and energy. On Monday, the Egyptian prime minister, Mostafa Madbouly, fixed the price of unsubsidised bread. Middle Eastern governments have also moved to purchase more food supplies from other European producers, and have imposed rationing and export bans on staples including flour, pasta and lentils. Egypt is also planning to buy 50 percent more wheat from local farmers than it did in 2021. Read full story