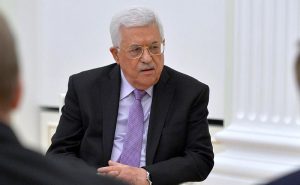 Representatives of arch-enemies Fatah and Hamas are meeting this week in Cairo for a second round of talks aimed at allowing elections in the West Bank and Gaza to go ahead this summer.
Mahmoud Abbas (pictured) called the elections – the first for 15 years – in January but his Fatah party and terror group Hamas are deeply divided on key issues which need to be resolved before Palestinians go to the polls. Legislative elections are scheduled for 22 May with a presidential poll due on 31 July. Principal among the issues yet to be negotiated are which parties’ security forces will guard polling stations. “We will discuss which police will protect the ballot boxes, especially in the Gaza Strip. We have suggested that the [Palestinian Authority] police cooperate with the Hamas-run Gaza police,” senior Fatah official Mundhir al-Hayek told the Ma’an News Agency.
Previous attempts to stage elections have foundered on the distrust between the two sides which is rooted in the violent coup staged by Hamas in Gaza in 2007, in which PA officials were brutally murdered.
The Palestinian president is sending Fatah secretary-general Jibril Rajoub to the talks while Hamas’ delegation will be led by deputy chief Saleh al-Arouri.
Earlier this month Abbas met a key Hamas demand by releasing a decree establishing an elections court which, it is planned, will arbitrate disputes between Fatah, Hamas and others competing in the vote. The president is, however, facing a revolt in his own ranks with Fatah dissidents led by Nasser al-Kidwa, the nephew of Yasser Arafat and a former PLO ambassador to the United Nations, planning to run a rival slate. In response, Abbas has expelled al-Kidwa from Fatah and cut off funding for his Yasser Arafat Foundation.
Read full article