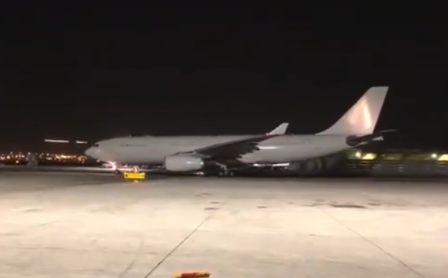 The families of 8,000 Palestinian students feared to be stranded abroad due to the coronavirus staged a protest in Ramallah on Monday. The parents carried posters attacking the Palestinian Authority which read: “You Returned Your Children [Home], Return Our Children [To Us].” The PA pledged on Sunday evening that the government would begin bringing the students back to the West Bank, starting with 1,500 who are in Egypt. “There are another 6,500 people stuck in various countries of the world, and coordination is being conducted with Jordan to evacuate them on Royal Jordanian planes,” Ibrahim Melhem, the PA government spokesperson said. The news came as the UN said it hoped to transfer two large shipments of coronavirus-related medical supplies, both flown from the United Arab Emirates to Israel, to the West Bank and Gaza in the coming days.

The PA has objected to the shipments on the basis that the flights from the UAE to Israel helped to normalise relations between the two countries, which don’t have diplomatic ties. The first shipment – which includes medical supplies and 15 ventilators – arrived in Israel in mid-May (pictured) but is now being held at a holding facility as the PA has refused to accept it. The UN has indicated that it may redirect both shipments to Gaza, where it hopes Hamas will take a softer line and accept them. A second plane landed in Israel last week. The PA has also said that it won’t now accept a $230.2m loan approved by the Israeli government in April to help the West Bank cope with the economic impact of the coronavirus. Ramallah’s decision follows its decision to sever ties with Israel over the issue of West Bank annexation. Read full article