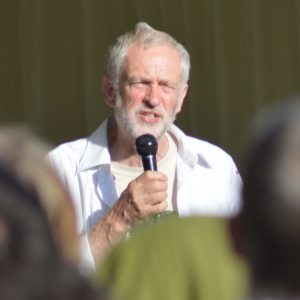 Jeremy Corbyn is involved in a fresh row over antisemitism in the Labour party following the discovery of a 2013 speech in which he claimed that Zionists do not understand “English irony”.

The Labour leader was speaking at a conference endorsed and advertised online by Hamas’ military wing and which featured speakers who had advocated boycotting Holocaust Memorial Day and blamed Israel for the 9/11 attacks on the Twin Towers.

In his speech, which appeared to reference an exchange between a Jewish blogger and the Palestinian ambassador to Britain at a previous event, Corbyn said: “Zionists … clearly have two problems. One is they don’t want to study history, and secondly, having lived in this country for a very long time, probably all their lives, they don’t understand English irony either. They needed two lessons, which we could perhaps help them with.”

The campaign group Labour Against Anti-Semitism has filed an official complaint against Corbyn with the Labour party. It says it is reporting him “for antisemitism and for bringing the party into disrepute”.

In a statement released on Friday evening after the beginning of Shabbat, Corbyn defended his remarks saying that he used the term Zionist “in the accurate political sense and not as a euphemism for Jewish people”. He also claimed to be defending the Palestinian ambassador from “deliberate misrepresentations” by people “for whom English was a first language, when it is isn’t for the ambassador”. The Labour leader conceded, however, that he is now “more careful” with the term “Zionist” because it has been “increasingly hijacked by antisemites”.

Stephen Pollard, the editor of the Jewish Chronicle, tweeted that Corbyn “doubtless thinks he’s using the antisemite’s ‘get out of jail free card’ by saying Zionist rather than Jew. But it’s almost impossible to read this as anything other than a reference to Jews”. “Read this with Jew, rather than Zionist,” he suggested.

LFI chair Joan Ryan said in response: “Jeremy Corbyn’s comments, and the company in which he chose to make them, were highly offensive to British Jews. They should not be defended but unequivocally condemned.

“And, once again, I would urge him to apologise and take responsibility for actions which have caused such hurt, anger and distress.”

LFI director Jennifer Gerber suggested: “Even Baroness Chakrabarti’s weak report on antisemitism recognised that critics of Israel should use the term Zionist ‘advisedly, carefully and never euphemistically or as part of personal abuse’.

“It says a great deal about Jeremy Corbyn that his instincts and prejudices lead him to do precisely the opposite.

“Given his inability to take any personal responsibility for the crisis of antisemitism afflicting the Labour party, we have no expectation that Mr Corbyn will offer British Jews the apology they deserve for these despicable remarks.”

The revelation also drew strong criticism from other Labour MPs. Luciana Berger said the Labour leader’s “inexcusable comments” made her feel “unwelcome in my own party”.

“It was divisive, hateful and like Powell’s speech it undermines the existence of an entire group of British citizens by depicting them as essentially alien,” he told the New Statesman magazine on Monday.

“We can only judge Jeremy Corbyn by his words and his actions. He has given support to racists, terrorists and dealers of hate who want to kill Jews and remove Israel from the map.

“When he implies that, however long they have lived here, Jews are not fully British, he is using the language of classic pre-war European antisemitism.

“When challenged with such facts, the evidence for which is before our eyes, first he denies, then he equivocates, then he obfuscates.”

The notion of disciplinary action against the Labour leader received backing from a former member of Labour’s governance and legal unit, Dan Hogan, who wrote on Twitter: “If Corbyn were any other member, he would have been suspended and investigated, and the [National Executive Committee] would nod through the bulging report on his offences. He would join the long queue of other awful people waiting for a disciplinary hearing with the National Constitutional Committee.”

Earlier this month, Ms Ryan wrote to the Labour party’s general secretary, Jennie Formby, requesting that she open an investigation into comments made by Corbyn on the Iranian state broadcaster, Press TV, in 2012. She highlighted “ludicrous” and “grotesque” charges made by the Labour leader alleging Israel was behind an Islamist terror attack in 2012.

In the interview, Corbyn also welcomed the release by Israel of 1,000 convicted Hamas terrorists – as part of a prisoner swap to secure the freedom of captured IDF soldier Gilad Shalit – saying that he hoped they were “now in safe places”. Collectively the terrorists were responsible for the murder of 569 Israelis, including Holocaust victims, a 15-year-old schoolgirl and a pregnant woman.

“I believe that the revelation of Mr Corbyn’s comments – his evocation of antisemitic conspiracy theories and his meeting with, and support for, convicted terrorists – brings the Labour party into disrepute, and I would ask that they be investigated on this basis,” Ms Ryan wrote.

Among those who spoke at the 2013 conference alongside Corbyn were individuals alleged to have links to white supremacists; the author of a pamphlet which describes homosexuality as a “great sin” comparable to paedophilia and incest, which should be “severely punished”; and an academic who has defended comparing Israel to the Nazis.

Ms Gerber described the event as a “convention of pro-Hamas extremists, anti-Israel haters, and antisemitic conspiracy theorists, which was promoted by a proscribed terror group”.

“The thousands of Israelis who have family members killed by Hamas terrorism will not understand why Mr Corbyn believes these are suitable people to associate with, nor should anyone who wants to see peace in the Middle East.

“Mr Corbyn should apologise for his attendance immediately,” she added.